Cognitive load describes the amount of working memory resources currently used by an individual where the higher the cognitive load, the harder the brain is working, and the more “distracted” the brain is to other stimuli. High cognitive loads can lead to cognitive fatigue, which then has adverse physical and psychological effects on an individual. The link between cognitive load and physical performance is gaining wide acceptance in human performance, but the ability to objectively measure cognitive load has only been performed in a laboratory environment. The ability to measure cognitive load and its effect on operational performance “in the field” is highly desirable. Research has shown that an effective measurement of cognitive load can be made by the tracking of the small, involuntary eye movements (microsaccades). However, the required instrumentation is not amenable for use in the field and thus has limited applicability to potential DOD and professional sports clients. In this project, we researched the feasibility of a new method to measure eye microsaccades in an operational environment using portable, commercial off-the-shelf (COTS) hardware. 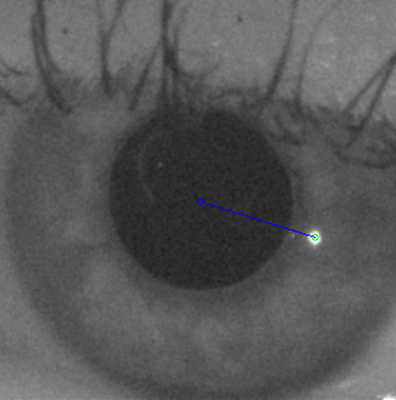 The objective of this program was to research the application of a technique for eye tracking called Pupil Center Corneal Reflection (PCCR) using visual feature detection of a near-infrared light source reflected off the eye to accurately measure microsaccades. Our approach was to prototype a measurement system capable of measuring eye movements from 0.05 to 0.5 degrees using COTS hardware. To detect and measure such small movements, the team used a camera with a frame rate of 300 frames per second and developed algorithms necessary to track the center of the pupil and the glint of the near-infrared light source (Figure 1). Once these algorithms were developed, we enlisted a cohort of 9 individuals to whom we would administer a cognitive load test while measuring their eye movements. This data capture was conducted under an approved institutional review board (IRB) protocol.

The results of this project showed that we could use COTS hardware to accurately track and measure eye movements. We were able to demonstrate a pupil tracking accuracy of 1 degree and the ability to measure microsaccades between 0.08 and 1.0 degrees. Though our data capture was conducted in a laboratory, we were not controlling ambient light sources and found that the use of a near-infrared light source created a consistent illumination of the eye and well-defined corneal reflection. This approach could be used across a variety of indoor and outdoor environments; however, direct sunlight may be something to be avoided. The next step in this area of research is to take our ability to precisely track eye movement and correlate that with a physical load-induced cognitive load.