Let’s face it: Roadway work zones are hazardous. Although essential to maintaining a modern highway system, road construction endangers motorists who drive through an unfamiliar array of signs, barrels, and lane changes, as well as the workers who build, repair, and maintain in-use highways. Since the turn of the century, the U.S. has improved work-zone safety through comprehensive planning and by using historical accident data to identify and understand hazards. Despite these improvements, more than 40,000 people a year are injured in automotive work zone accidents. According to the Federal Highway Administration, approximately 600 people are killed in work zone accidents each year. And work zones are ubiquitous, averaging one every 100 miles in the U.S.

Because more than 30 percent of crashes in mobile or static work zones involve drivers hitting the last vehicle, work zones are often protected by “safety trucks.” These trucks have crash-absorbing mechanisms attached at the rear designed to absorb the impact of a vehicle and stop it before it can hit the work crew. While these crashes are dangerous for the drivers of the safety truck and the vehicle hitting it, the situation has lower risk of catastrophe than a vehicle entering a work zone with multiple, unprotected workers on the ground.

ABOUT THE AUTHOR
Steven W. Dellenback, Ph.D., is executive director of the Intelligent Systems Department in the Automation and Data Systems Division. He has extensive experience in systems design and integration, computer graphics, operating systems, and programming languages. His department performs research in automated vehicles, cooperative vehicle systems, active safety systems, transportation systems, data analytics, and cybersecurity, among others. 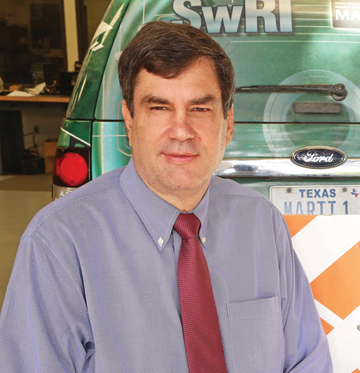 For more than a decade, automation engineers at Southwest Research Institute (SwRI) have performed more than $50 million worth of research and development related to connected-vehicle and automated-vehicle technologies for commercial, military, and state and federal clients.

SwRI is also a pioneer in Advanced Traffic Management Systems (ATMS) (see related story, page 5), which use a fusion of technologies to manage and reduce traffic congestion. By combining connected vehicle and advanced transportation technologies with other research projects in vehicle automation, SwRI engineers demonstrated how connected automation could help reduce injuries and fatalities in road work zones.

The SwRI team demonstrated the feasibility of using automated vehicles to assume the most dangerous roles in stationary or rolling work zones. They also took advantage of connected-vehicle technology to allow maintenance vehicles to communicate with each other, the work crew, and the roadside infrastructure. Using this technology, workers and the vehicle fleet can maintain communication with advanced traffic management systems, exchanging vital information. 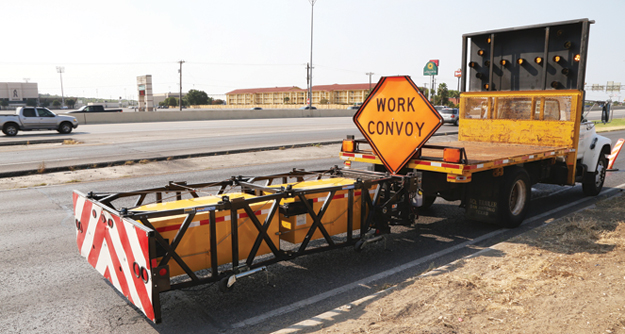 An automated truck-mounted attenuator not only removes the driver from a vulnerable position, but also helps avoid the traffic hazards a driver faces getting in and out of the cab to reposition the truck as the work convoy moves down the road. 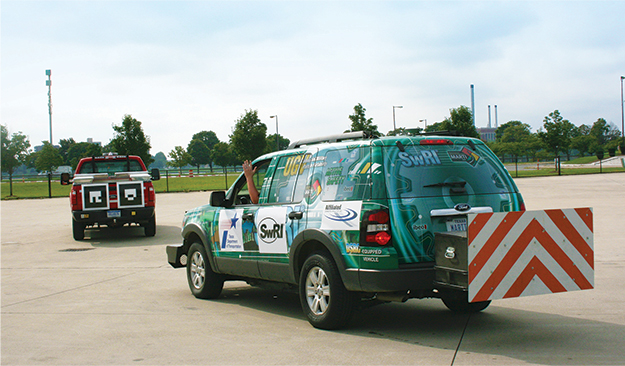 In a work zone application, lead vehicles could have unique fiducial markings that allow the ATMA to recognize which vehicle it should follow. The fiducial, which looks like a QR code, combined with the “bread-crumb” vehicle-following system, builds safety redundancy into the system and enhances advanced platooning behaviors, such as consistently spaced following.

For this demonstration, SwRI engineers also used V2x technology to provide a virtual “bread crumb” trail allowing the automated attenuator truck to meticulously follow a lead vehicle. The control commands can be entered using a tablet interface in the lead truck or by a person in the work zone, transmitted using the connected vehicle network.

V2I communication allows a traffic management center to monitor and interact with the work zone, monitor traffic and predict problems, and use dynamic message signs to provide motorists up-to-date information about the work zone.

For mobile work zones — including vehicles spraying weeds, sweeping streets, or striping lanes — the SwRI-designed ATMA can be programmed to follow a maintenance vehicle in front of it or lane stripes on the pavement passing beneath it. The route does not have to be mapped before the ATMA can be used. The ATMA also can autonomously communicate the maintenance convoy’s position and speed to the traffic management system control room, which in turn can communicate an alert to approaching vehicles about the work zone.

In 2009, SwRI developed its first automated vehicle platooning application. SwRI engineers first demonstrated the technology on the streets of Washington, D.C., highlighting commercial applications before hitting the “Robotics Rodeo” circuit, demonstrating military applications at several U.S. Army bases. The SwRI-designed platooning algorithm integrates data from many vehicles into a control strategy that can direct how each vehicle paces and places itself in a platoon. Because this control strategy was already implemented in SwRI’s automated vehicle platforms, the ATMA performed automated driving functions based on the positions of the other vehicles in the work convoy.

For the ATMA project, the SwRI team also used a reference marker, called a “fiducial,” on the lead vehicle. The fiducial looks like a QR code and allows an ATMA to refine its position and orientation behind the lead vehicle. In a work zone application, lead vehicles could have unique tags with fiducial markings that allow the ATMA to recognize which vehicle it should follow. This system, combined with the “bread-crumb” vehicle-following system, builds safety redundancy into the system and enhances advanced platooning behaviors, such as consistently spaced line following. Fiducial markings also identify the various vehicles within the maintenance fleet.

In 2012, SwRI developed its first gesture recognition system for a military unmanned ground vehicle (UGV) application. SwRI engineers developed an image-processing algorithm capable of identifying and distinguishing a dismounted soldier’s arm gestures. This technology allowed more natural interaction between the warfighter and the automated vehicle, effectively allowing a UGV to function as a member of the squad.

SwRI developed similar applications to allow work crews to use hand gestures to control an ATMA. With this application, workers needing to re-position the vehicle do not have to expose themselves to oncoming traffic by walking to and mounting the TMA. The gestures allowed commands — such as follow-me, offset to the left, offset to the right, or stop — to be captured by a vision system on the ATMA. The gesture recognition technique allows workers to move the automated attenuator vehicle without having to get in and out of it, saving time and improving worker safety. 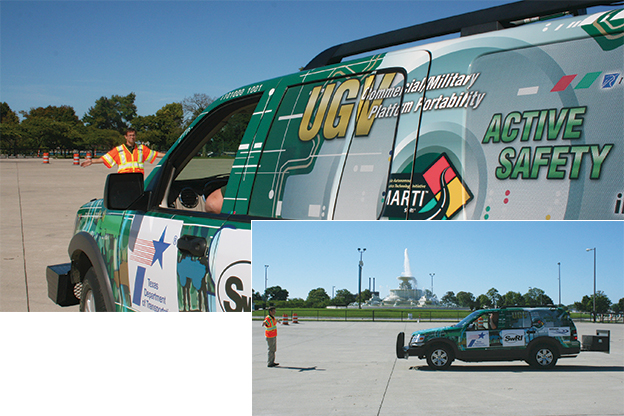 SwRI developed an application to allow work crews to use hand gestures to control an ATMA. The gesture-recognition application allows workers to move the automated attenuator vehicle without having to get in and out of it, saving time and improving worker safety

As automated and connected vehicle technologies advance, SwRI is poised to deploy them in a next-generation ATMA. For instance, RANGER is an SwRI-designed, patented approach to automating localization through precise positioning and orientation. RANGER, which won a 2015 R&D 100 Award, uses localization algorithms as well as a ground-facing camera to image and store the unique “fingerprint” of a road surface. The vehicle re-orients itself precisely in relation to that stored image. RANGER allows automated driving within 1 to 2 centimeters of a target path, far more precisely than the highest-accuracy GPS systems. RANGER also can operate in areas or environments where GPS has poor performance or fails completely. This is important for instances when the ATMA is used in a tunnel, around tall buildings, among trees, or in a large interchange construction project.

In test deployments on vehicles ranging from compact cars to commercial trucks, RANGER has performed successfully in city and highway driving, in all illumination conditions, and in common adverse weather conditions. Although other sensor-based localization approaches are becoming common, none can match RANGER’s precision. SwRI’s plan is to dynamically collect RANGER data on the lead vehicle and share the maps with the ATMA so that it will follow the lead vehicle’s path precisely

To prototype an automated truck-mounted attenuator, SwRI mounted a simulated apparatus to the rear of one of its automated vehicles. Engineers demonstrated vehicle-following and gesture-recognition behaviors, and integrated the prototype with an automated traffic management system to monitor and interact with the vehicle. 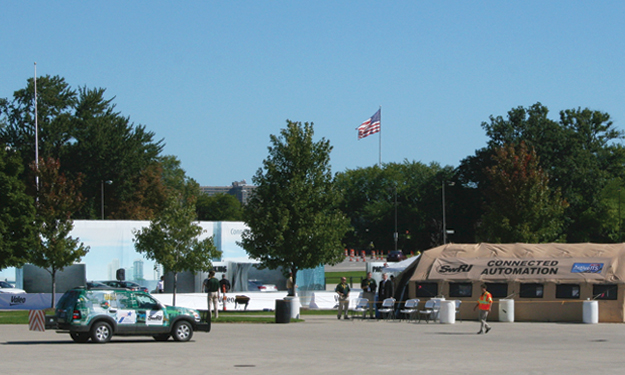 In the past 10 years, SwRI has developed a number of technologies that can be applied quickly and cost-effectively to work zone safety. Using multiple positioning mechanisms, a cooperative convoy control system could monitor the status of the vehicles, control the order of the work platoon, and also control the lateral and longitudinal offset for the automated crash-cushion vehicle that follows.

Because work zone injuries and fatalities remain a significant problem, existing vehicle automation and connected vehicle technologies from SwRI are relevant to enhancing work-zone safety. Deploying these technologies into “crash cushion” maintenance vehicles is relatively straightforward as a first step to improving the safety of many work zone projects, such as corridor reconstruction projects and mobile and stationary maintenance projects.

Advanced traffic management systems (ATMS), such as San Antonio’s TransGuide system, have been deployed in most major cities. These systems have been shown to reduce secondary collisions, mitigate congestion, and, most importantly, save lives. SwRI has been a pioneer in intelligent transportation systems, designing and developing ATMS for more than 20 years. Comprehensive, coordinated ATMS provide real-time, up-to-the-minute information on road conditions and help police and fire departments and highway crews respond more quickly to traffic accidents and weather conditions. SwRI has developed state-of-the-art ATMS software called ActiveITS, which has been integrated into Florida’s SunGuide®, Texas’ Lonestar®, and New England’s Compass traffic management systems. This technology can be shared with other agencies across the U.S. Using ActiveITS, SwRI has integrated multiple large-scale, statewide ATMS that support 60 protocols, including dynamic message signs, incident management, camera monitoring and control, and center-to-center integration. SwRI supports more than 40 systems in five states covering more than 10,000 lane miles of highway in seven of the 20 largest U.S. cities.