The alternative energy industry continues to grow in size and diversity as more countries invest and expand their use of wind, solar, hydroelectric, and geothermal power. Concentrated solar power (CSP) is one of many technologies experiencing growth in this area. It differs from conventional photovoltaic solar panels in that CSP systems use large arrays of mirrors or lenses to concentrate sunlight onto a small fixed point. The heat from this fixed point is then transferred to a conventional steam generator for conversion into electricity. The United States added 1,000 megawatts of CSP capacity to the electricity grid in the past year, bringing the total to about 1.4 gigawatts. (By comparison, the U.S. passed 16 gigawatts of photovoltaic solar power capacity in 2014.)

But a lack of adequate storage solutions for intermittent power sources is one of the most significant hurdles to integrating alternative energy systems. CSP relies upon sunlight for operation. For CSP to mature as a source of electricity and meet goals of uninterrupted supply, new energy storage systems must be developed and adapted for times when sunlight is not available. 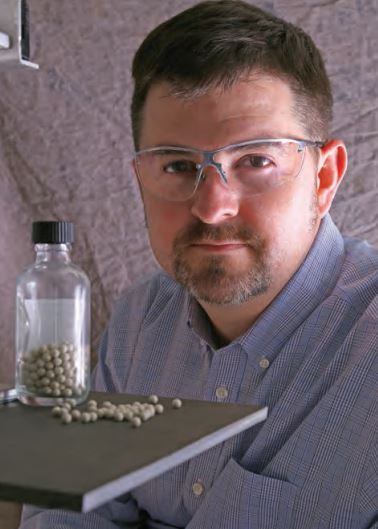 Dr. James D. Oxley is a principal scientist in the Chemistry and Chemical Engineering Division. He performs micro/nanoencapsulation and particle design research related to processes, chemistry, formulation development, and analytical methods. He has worked to develop encapsulated products and ingredients for applications including pharmaceuticals, nutraceuticals, consumer products, paints, coatings, energy storage, and other industrial products.

Two modes of energy storage are applicable to CSP plants. Thermochemical systems use the energy storing capacity of a reversible chemical reaction, while thermophysical systems rely on the physical properties of a material. Both kinds of systems are under investigation, including latent (phase changing) and sensible (static phase) heat options. One of the newer plants uses high-temperature molten salts to provide up to six hours of energy storage after sunset. However, to make CSP systems competitive with conventional forms of electricity, energy storage systems need to be optimized.

Current commercial thermophysical energy storage systems use high-temperature molten salts in two large tanks, adding about $30 per thermal kilowatt-hour (kWht ) to costs. One tank receives heated molten salt from the CSP receiver tower and supplies heat for the steam generator. The second tank receives the cooled molten salt from the steam generator and transfers it to the CSP receiver tower to be reheated.

A team of chemists from Southwest Research Institute (SwRI), under contract with a commercial client firm, recently sought to develop a single-tank solution to reduce the cost by half, to $15 per kWht . This approach uses latent heat and a novel encapsulation formulation for its high-temperature, phase-changing salt. The cost reduction is achieved through a 50-percent increase in energy density and a consequent reduction in the amount of salt required for thermal storage. The team of SwRI chemists and the commercial client developed a novel encapsulation formulation of a high-temperature phase change salt for use in a single tank CSP thermal storage system. 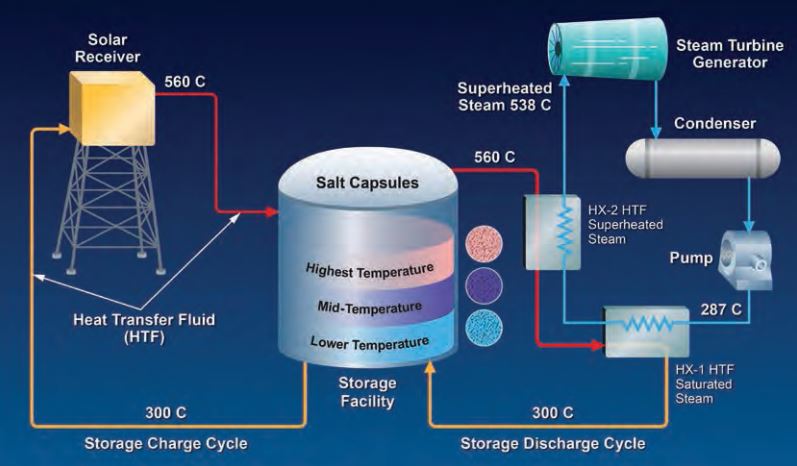 Microencapsulation is the process of containing an active ingredient within a protective shell, or matrix, to produce particles ranging from submicron to several millimeters in size. Microcapsules have applications in multiple fields, including pharmaceuticals, food, cosmetics, consumer products, agriculture, paints, coatings, construction, and defense. Encapsulated phase-change materials have been used for decades in applications ranging from thermal indication in forehead thermometers and coffee mugs, to temperature regulation in textiles and building materials. The traditional techniques for preparing capsules for low to moderate temperature applications use organic polymer shell materials and waxes, fats, or other organic materials as the phasechange media. In most cases, the upper temperature limit is 150 degrees Celsius. Encapsulating phase-change materials for solar thermal energy storage application requires a novel formulation to address the extreme environment and the unique properties of the payload.

Microcapsules used in conventional CSP systems must be stable at temperatures up to 600 degrees C, accommodate the volume expansion associated with inorganic salts as they melt or solidify, withstand the intergranular pressure associated with storage in a large tank, and survive 30 years of daily phase-change cycles. No conventional commercial encapsulation solutions meet this set of criteria, but many existing capsule formulations can meet individual objectives. For example, inorganic shell materials can withstand the high temperature but lack the flexibility to accommodate the core material’s volume expansion of up to 20 percent when the inner salt melts. 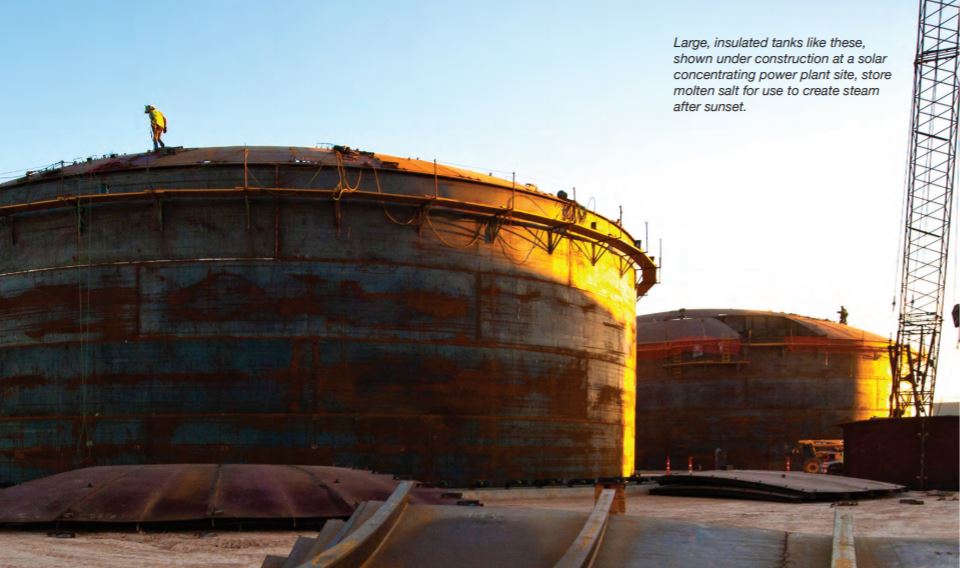 Micrographs of phase-change salt tablets show their layered construction, before (left) and after (right) they are heat-treated to form an internal void that allows for expansion. 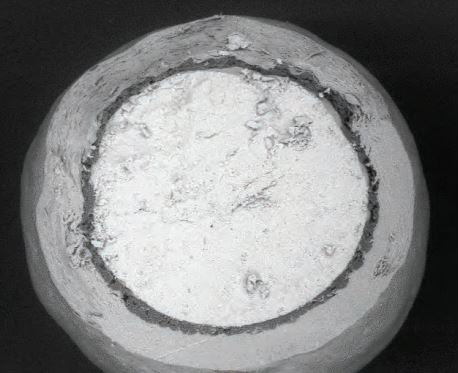 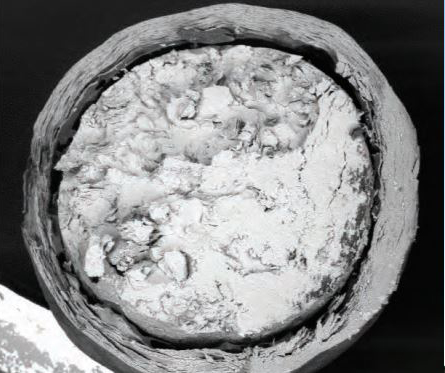 To meet the CSP requirements, SwRI scientists developed a novel three-layer shell and a process to produce it. To withstand the high temperatures of a CSP system, the outer layer was formulated with a clay-based composite that is stable beyond 600 degrees C. A ceramic binder and polymeric film former were used to aid outer-layer deposition as well as subsequent heat tempering. The middle layer of the capsule shell was a sacrificial organic material that burned away to yield an inner void between the outer capsule wall and inner core material. This void provides space for core material to expand as the salt turns from solid to liquid. Finally, a third inner layer serves as a temporary protective barrier between the sacrificial polymer and the payload. The inorganic nitrates, such as potassium nitrate, commonly used as high-temperature phase change are typically strong oxidizing agents. To prevent rapid oxidation of the organic sacrificial layer during thermal evacuation at 250-300 degrees C, the inner layer isolates the salt until void formation is complete. As the salt melts and expands when temperatures reach 315- 340 degrees C, it ruptures this temporary protective inner layer.

The capsules were prepared using a fluid bed coating encapsulating process. Fluid bed coating, also known as air suspension coating, is the second most-common encapsulation process and is used across multiple industries. With contract manufacturing capacities available up to 1 ton per hour, it is an attractive process for short-term scaleup potential.

Spherical pellets, or prills, of inorganic salt, approximately 3-5 millimeters in diameter, were loaded into a fluid bed coater and fluidized on a bed of air. While suspended in warm air, coating solution was sprayed onto the particles, resulting in the incremental formation of a coating. The inner, middle, and outer capsule layers were coated in succession, using coating timing and solution flow rates to control the thickness of each layer. The coated salt prills were then subjected to a controlled heat treatment to remove residual coating solvent, ameliorate the film-forming polymer in the outer layer, and eliminate the middle sacrificial layer. For potassium nitrate capsules, the heat treatment reaches 320 degrees C. Once the sacrificial layer was removed, the capsules were then heated to 400 degrees C to melt the inner core. The SwRI team used optical and electron microscopy to confirm capsule morphology during the preparation and heat-treatment process. 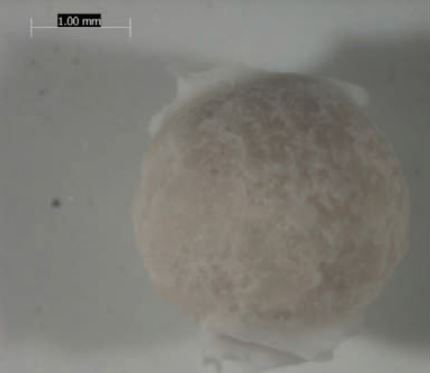 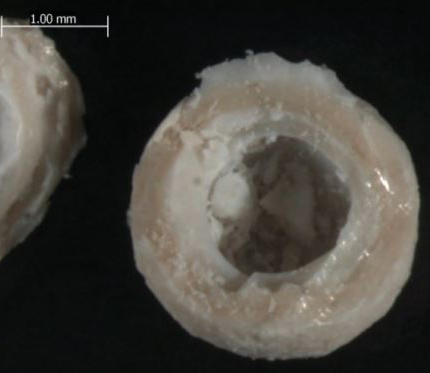 This micrograph shows the condition of phase-change capsules after 250 cycles from 250 degrees C to 425 degrees C.

Testing and evaluation Once the capsules were prepared, the team evaluated the capsules’ mechanical stability and phase-change performance, including simulating performance over a 30-year service life or approximately 10,000 heat/cool cycles. Mechanical testing reported a 40 percent decrease in capsule strength compared to the uncoated salt prill. To compensate for reduced mechanical strength, final storage tank designs may require baffles to reduce intergranular pressure on the capsules. Thermogravimetric analysis confirmed that the phase change activity of encapsulated potassium nitrate over a 20-cycle period created no evidence of decreasing intensity or reduced capsule integrity. To accelerate the testing process for 10,000 cycles, the SwRI chemists hosted a rapid thermal cycling apparatus designed and built by the client. The device submerges batches of phasechange capsules between a “cold” tank at 250 degrees C and a “hot” tank at 425 degrees C for two to five minutes per cycle, with each tank containing a lowermelting heat-transferring liquid salt. The capsules remained intact after being cycled 5,000 times, although they did show some signs of salt diffusion through the capsule walls. Microcapsules designed with a sacrificial layer normally have some porosity in their outer shell so gases can escape.

The initial capsule design did not include a step to seal the capsules. Although the initial allotted project achieved 5,000 cycles, the team has proposed subsequent experiments and formulations to deposit a nickel coating onto the surface of the capsule to reduce porosity and enhance its mechanical strength.

The client’s initial vision and the SwRI team’s encapsulation expertise combined to develop a novel, high-temperature phase-change microcapsule. The capsules are stable up to 600 degrees C, possess moderate mechanical strength, withstand the thermal expansion of the encapsulated salt as it transitions between phases, and have been demonstrated to survive 5,000 thermal transfer cycles. This work was conducted on a laboratory scale, preparing fifty 200-gram batches of capsules, and using 10-gram quantities for the cycling studies with a potassium nitrate salt core. Future projects could address further optimizing of the capsules and investigating their performance on a pilot scale. Additional enhancements could include a nickel coating to seal the capsules, as well as encapsulating other salts. Pilot-scale research would involve preparing 25-kilogram (55-pound) batches of capsules and supplying them for larger thermal cycling studies to demonstrate their use in a thermal energy storage system.