Thunder roared in the distance, and dark clouds cloaked the sky as if under a wicked wizard’s spell. Pikes Peak towered over a fleet of five medium-duty electric trucks with their batteries charging at a rate of 50 kilowatts. Nearby, a team of Southwest Research Institute (SwRI) engineers watched an array of monitors and gauges beneath a makeshift rain shelter. The SwRI-built aggregation system confirmed that the five-vehicle fleet was pulling a total load of 250 kilowatts from the  power grid. Suddenly, the grid made a request of the energy aggregator: Become an energy generator and provide the grid with 250 kW of power. The aggregator processed the request and commanded the charging stations to reverse energy flows on the vehicles. A second later, the five vehicles were pushing energy from their storage batteries back into the grid.

As the storm neared, a second request came in: Become a load resource and absorb 100 kW from the grid. The aggregator analyzed the vehicles’ charge schedules and issued commands to stop sending energy into the grid and start absorbing it, while also prioritizing the battery charging according to anticipated vehicle use. As commands kept coming in, the wicked wizard finally had his way and rain poured as the soaked SwRI engineers tried to read one more number from the chargers.

That was one of many testing operations carried out in September at Fort Carson Army Base, Colo., successfully demonstrating vehicle-to-grid technology in military operations thanks to an SwRI-developed electric vehicle aggregation system. As the smart grid continues to evolve, the desire and need for new energy storage systems to support it continues to grow. Integrating renewable energy, such as wind and solar, into the grid means those energy sources’ varying output must be balanced with the energy load across the grid. Energy storage systems can help; the problem is, they are neither cheap nor simple to build and integrate. Additionally, many technologies, such as flow batteries or large-scale lithium-ion systems, have yet to be proven viable and cost-effective. This has led toward development of an alternative to centralized large-scale storage — distributed energy storage solutions using electric vehicles. The SwRI team is pushing electric vehicle technology forward for grid energy storage through two research programs: one for the U.S. Department of Defense and another for a commercial vehicle fleet.

Using vehicles during their idle times (which can account for up to 90 percent of the time) to support the electrical grid using the vehicles’ battery storage capability is called vehicle-to-grid (V2G) technology. Many chargers only allow power to flow into the vehicle. Such unidirectional systems can provide demand/response services, where the demand (load) imposed by charging the vehicles’ batteries is curtailed during peak demand periods. Unidirectional systems also can provide frequency regulation services where the chargers can be turned on or off to help maintain overall grid frequency. Bidirectional charging systems can act in a true V2G manner by allowing energy to flow back from the vehicle into the grid, thus acting as a short-term generation resource. Bidirectional systems also can manage and move power during times when they are not taking load from the grid. In the military aggregator developed by SwRI, the chargers and vehicles are able to support an emergency “island” microgrid by supplementing the typical diesel generators used for backup power. 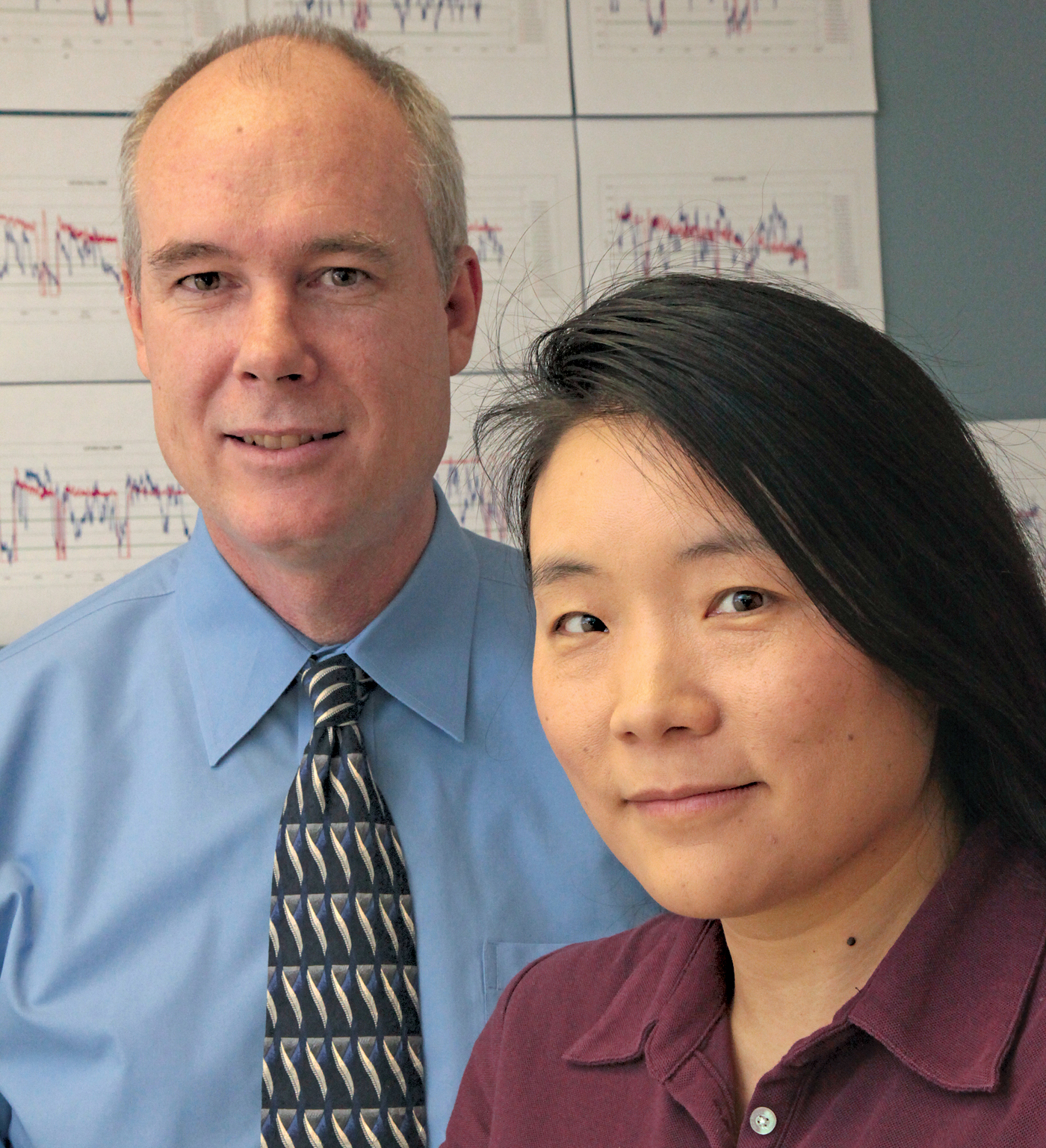 Sean C. Mitchem is a principal analyst and acting group leader of the Smart Energy Technologies Group within the Communications and Embedded Systems Department, Automation and Data Systems Division. He is a system engineer, software architect and project manager whose current focus area is smart-grid energy systems. Yaxi Liu is a research analyst within the Smart Energy Technologies Group. Her research interests include software development ranging from enterprise applications to embedded systems implementation, to smart-grid related technologies.

Electric vehicle (EV) aggregation is the concept of managing a collection of electric vehicles or charging stations for power management purposes. The aggregator is a control system that sits between an energy command system and the vehicle chargers to dispatch power flow requests to the EV fleet. It collects status information from each fleet unit, such as connection status, state of charge, real and reactive power levels and flow directions, and maximum available charge and discharge power. It aggregates this data into a fleet perspective to define the fleet’s energy status and presents the fleet perspective to a supervisory control system. When the control system sends a power request to the aggregator, the aggregator evaluates the request against the fleet situation and dispatches individual requests to each EV fleet member to change its power usage.  Factors such as vehicle-use schedules and EV maximum power flows can be used to make the best decisions for the fleet while implementing the power request.

SwRI became involved in EV aggregation as a member of the team that designed and implemented the Smart Power Infrastructure Demonstration for Energy Reliability and Security (SPIDERS) program. SPIDERS involved creating a secure microgrid on Fort Carson to provide energy certainty to critical infrastructure when grid power is unavailable. The base’s energy generation capabilities include a 2-megawatt solar array and a fleet of five medium-duty electric vehicles that use direct current (DC) for high-power, bi-directional transfers. SwRI team members developed an aggregation system that manages the electric vehicle supply equipment (EVSE) to charge and discharge the vehicles. The SwRI system also proved capable of providing significant on-demand reactive power services to the grid, giving the army base even more economic reward for running the system.

The entire system — vehicles, EVSEs and aggregator — was the first to implement Society of Automotive Engineers (SAE) standards for bi-directional, DC fast charging. SwRI was the lead EVSE engineering team for the project, responsible for coordinating all development work required to implement and deploy to SAE standards. SwRI staff worked with two EV manufacturers to refit their vehicles to the SAE Combo Connector for DC fast charging. Additionally, SwRI brought vehicle and EVSE manufacturers together to develop an interface control document that clearly defined the messaging between EVs and chargers to the SAE standards. The SwRI-developed distributed software system is secure, self-recoverable and adaptable for various operation modes. 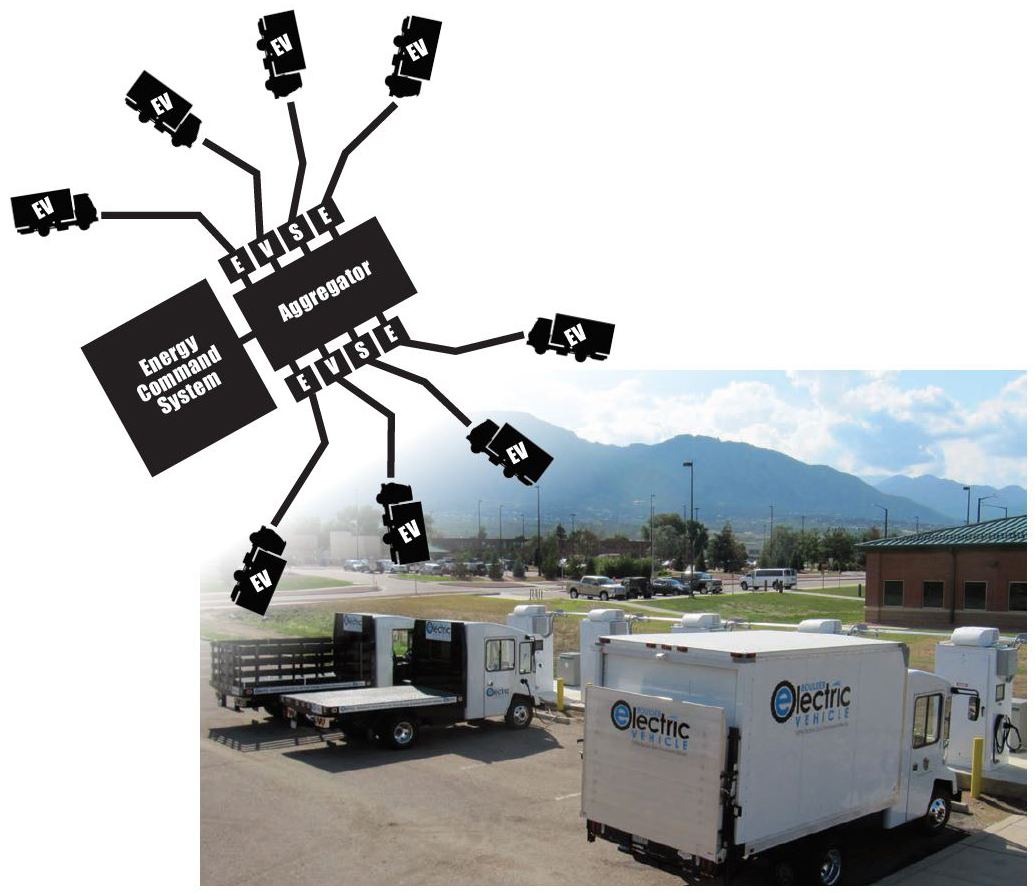 Seen here in schematic form, the SPIDERS program links a series of electric vehicles (EV) bi-directionally to an aggregator that manages the electric vehicle supply equipment (EVSE) in response to messaging from an energy command system.

The SwRI team is working on a second program involving the use of a commercial EV delivery fleet to provide very fast responses in frequency regulation on the grid.  Grid power frequency in the United States is maintained at 60Hz. When loads exceed the energy being generated, the grid’s frequency drops. Conversely, frequency increases when generation exceeds load. To effectively manage frequency changes, the energy market incurs millions of dollars in costs annually to have idle capacity available to quickly add or remove energy from the grid. As part of a pilot program for the Energy Reliability Council of Texas (ERCOT), the state’s regional independent system operator, the vehicle fleet will provide frequency regulation services in what is known as the “regulation-up” market, removing charge loads from the grid in less than one second — significantly faster than the ramp capabilities of coal, oil or natural gas fueled power plants. The SwRI-built hardware/software solution monitors grid frequency and EV power usage at 40 times per second. The software aggregator manages the EV fleet, turning chargers on or off as needed to meet grid power requirements in response to frequency changes. The technology proves electric vehicles are able to generate revenue for fleet owners while also lending extra support for the grid and increase the ability to use variable renewable generation through enhanced frequency regulation.  Recently the SwRI aggregation system became the first system qualified to bid electric vehicle energy into the ERCOT Fast Response Regulation Services market. 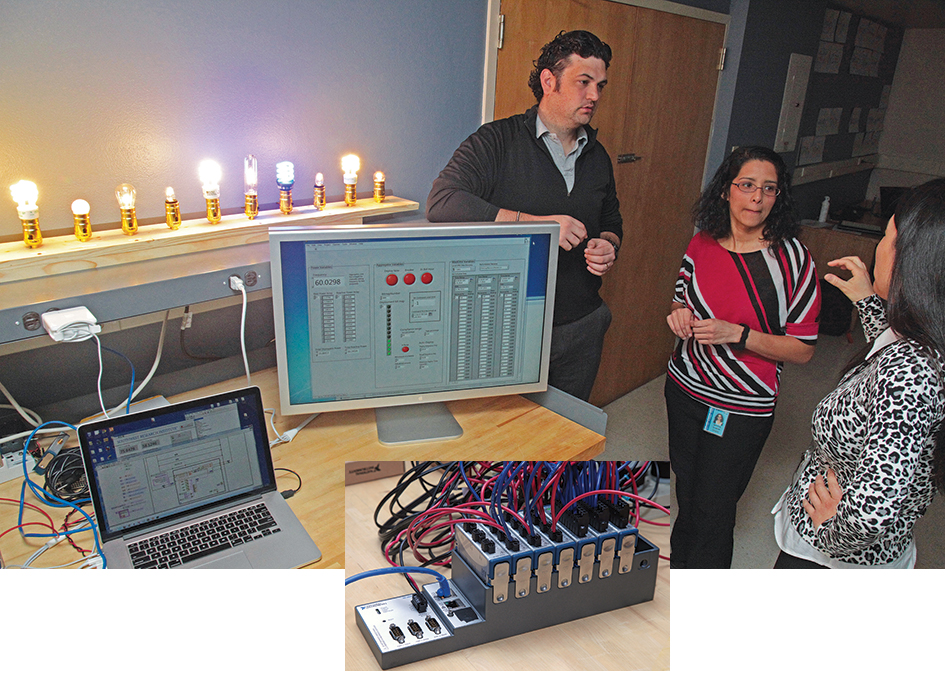 In a commercial application, an SwRI-designed aggregation system (inset) allows electric delivery truck fleet owners to earn revenue by using normal vehicle charge times to assist utilities in managing grid frequency by automatically suspending charging to some or all of the vehicles whenever the frequency deviates significantly from the normal 60-Hertz standard.  A laboratory test framework using light bulbs (background) in place of the vehicle chargers allows engineers to test and fine-tune the system pre- and post-deployment.

While research has indicated potential benefits of using electric vehicles for V2G services through analysis and simulation, few examples have been available to evaluate real results. By successfully deploying two V2G systems within true operational environments and demonstrating the value of V2G on a daily basis with vehicle fleet owners, the SwRI team has tossed the first rocks down the mountain of electric vehicle energy that may someday become a landslide change to both transportation technology and electrical grid management.

The authors acknowledge the significant technical contributions of Research Engineers Marisa Ramon and Gerardo Trevino, both of the Automation and Data Systems Division, as well as Joe Redfield of Redfield Consulting Services. Portions of the described work are funded under DOE Award Number DE-OE0000193 through the Austin, Texas-based Center for the Commercialization of Electric Technology (CCET).The authors wish to acknowledge Michael Dittmer of SwRI and Milton Holloway, Ph.D., CEO of CCET.