By Bryan Zavala and Chris Sharp

In the United States, trucks transport about 11 billion tons of goods worth more than $32 billion every day. Diesel powers 98% of the large over-the-road Class 8 trucks hauling these goods. Over the last 30 years, the industry has reduced emissions from heavy-duty diesel trucks, buses and other vehicles by 95% for nitrogen oxides (NOx) and 90 percent for particulate emissions. Today, it takes 60 new trucks to generate the same emissions as a single truck manufactured in 1988.

Aftertreatment systems are a series of components that clean diesel exhaust before it’s emitted by the tailpipe. They reduce the amount of harmful pollutants released into the environment.

In 1985, the Environmental Protection Agency (EPA) established the first emissions standard for heavy-duty diesel trucks and buses to address the growing impact of air pollution on human health and the environment. Even before the EPA was established in 1970, Southwest Research Institute was measuring exhaust emissions, eventually conducting the research and development needed to create techniques and technologies to reduce tailpipe emissions and improve fuel efficiency. Despite significant advancements in technology since, several regions in the U.S. still struggle to meet ambient air quality standards set by the federal government. These challenges highlight the continued need for innovative approaches. 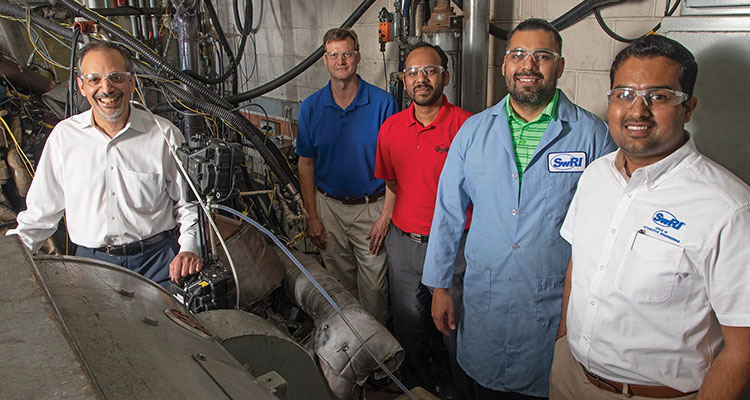 Zavala has been one of the primary aftertreatment calibration leads for the CARB Low NOx demonstration program and for similar client-driven efforts. Sharp specializes in emission research and development programs for heavy-duty and nonroad engine applications with a focus on integrating and evaluating aftertreatment systems for large diesel engines.

To address air pollution challenges, SwRI worked with regulatory agencies, vehicle manufacturers and suppliers to evaluate the feasibility of a new ultra-low NOx standard. During the combustion cycle of a diesel engine, nitrogen binds with oxygen atoms to create nitric oxide (NO) and then combines with oxygen to create nitrogen dioxide (NO2), an irritant gas that causes inflammation of the airways in the lungs at high concentrations. Together, nitrogen dioxide and nitric oxide are referred to as oxides of nitrogen or NOx. These pollutants are precursors to the formation of smog, acid rain, fine particles and ground-level ozone, all associated with adverse health effects. These new standards would also aim to lower carbon dioxide emissions. The need to simultaneously reduce NOx and CO2 emissions compounds the challenge and limits potential solutions. SwRI engineers proposed a systematic, holistic approach combining engine, aftertreatment and controls expertise to develop and integrate a pragmatic solution.

In 2013, the California Air Resources Board (CARB) contracted SwRI to investigate potential approaches for achieving an ultra-low NOx target. This high-visibility effort provided the heavy-duty industry a preview of the next generation of technologies. Specifically, the initiative focused on evaluating multiple aftertreatment technology pathways, low NOx engine calibration work, and model-based aftertreatment controller development. The final demonstration solution emphasized a practical approach, addressing impacts on fuel economy and tailpipe emissions. In the end, the solutions proved that new ultra-low NOx targets are feasible but revealed a need for continued exploratory efforts. 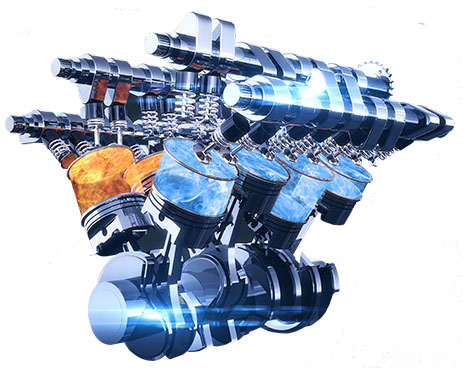 CDA reduces fuel consumption and emissions during light-load operations by shutting down some of the cylinders. In heavy-duty diesel engines, this can reduce fuel consumption by 8–25% for highway conditions. 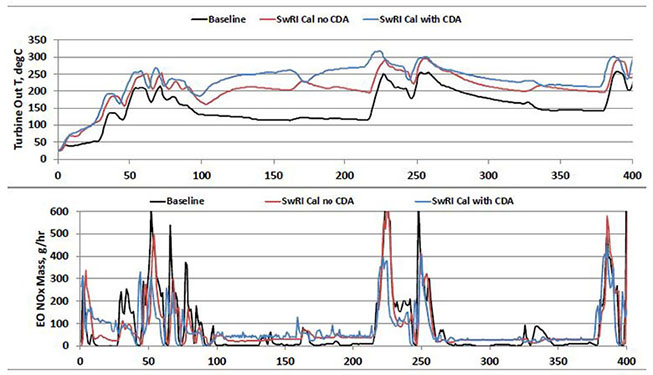 The program’s success set the stage for continuing efforts to improve and understand emissions technologies. The culmination of these activities led to the CARB low NOx Stage 3 program, which utilizes a new engine architecture to meet the EPA’s broader Phase 2 greenhouse gas targets while simplifying low NOx aftertreatment solutions. Through the continued efforts of a multidisciplinary team, SwRI has developed one of the most fuel-efficient, low-emission diesel engines in the world.

Many people think the most fuel-efficient engines are also the least polluting. While that may be true for CO2 emissions, reducing emissions such as hydrocarbons, carbon monoxide, particulate matter and NOx involves using abatement devices that typically incur a fuel penalty. This fuel economy and emissions reduction tradeoff required engineers to consider several solutions to find a balanced approach. Proper engine architecture is critical to employing low-emission technologies while avoiding a substantial fuel penalty.

For the program, SwRI selected a production 2017 Cummins X15 engine certified to U.S. 2010 on-road heavy-duty emissions regulations. Engineers modified the engine to include an exhaust gas recirculation (EGR) cooler bypass and a cylinder deactivation (CDA) system. EGR recirculates a portion of engine exhaust back into the cylinders to significantly reduce NOx, particularly from diesel engines. CDA reduces engine fuel consumption and emissions during light-load operations by shutting down some of the cylinders. Between reducing the pumping losses, which increases pressure in each operating cylinder, and decreasing the amount of fuel being pumped into the cylinders, fuel consumption can be reduced by 8% to 25% for highway conditions, particularly for large displacement engines.

To reduce NOx in low temperature scenarios, SwRI placed an extra SCR next to the engine, in front of the diesel particulate reduction system. The backend of the aftertreatment systems includes zoned CSF that combines DOC and DPF systems integrated with additional SCR technology. 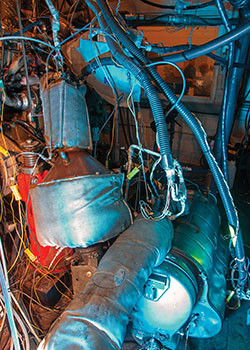 For the ultra-low NOx demonstration test cell, engineers placed a relatively simple, low-cost LO-SCR device (upper left) next to the engine. As the first aftertreatment device in the exhaust stream, LO-SCR takes advantage of engine heat to improve its performance and minimize NOx emissions during low-temperature operations.

By integrating and calibrating these systems, the team improved the engine’s thermal management and mitigated the fuel and emissions penalties associated with cold starts. Typically, cold starts generate the highest levels of NOx emissions because exhaust catalyst devices need to heat up for maximum effectiveness. However, recalibrating the engine and using CDA hardware increased temperatures by as much as 150° C to improve catalyst performance. The engine-out NOx mass rate is also reduced during the warm-up phase, decreasing the overall burden on the aftertreatment system.

Incorporating CDA provides several benefits, decreasing fuel consumption while simultaneously reducing NOx and CO2. Using the cold start Heavy Duty Federal Test Procedure (HD-FTP), engineers showed that modified engine calibrations and CDA decreased the fuel penalty from 4% to 1.3%. CDA also improved hot start fuel economy by 2%. While these results may seem like small changes to the overall fuel economy, current heavy-duty engines can accumulate a million miles of in-service use, so even small improvements can lead to substantial cost savings for end users and their clients.

Diesel engine aftertreatment systems remove harmful particulate matter and chemicals from exhaust emissions. A combination of diesel oxidation catalyst (DOC), diesel particulate filter (DPF) and selective catalytic reduction (SCR) systems convert the toxic cocktail of gases and soot in untreated diesel exhaust to harmless substances including oxygen and water. The combination of physical mechanisms and chemical reactions can, under the right conditions, achieve nearly complete removal of particulates and harmful gases. Typically, 70% of all harmful emissions are released immediately after start-up when catalysts are cold and less effective. Finding ways to increase catalyst temperatures more quickly is a key to decreasing NOx emissions. 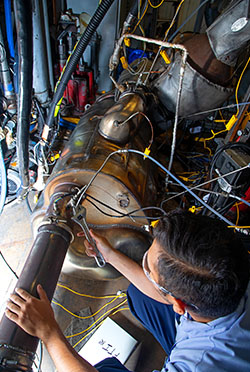 This graph compares the NOx in untreated engine-out emissions (blue) with the LO-SCR emissions (red) and tailpipe emissions (green) during cold-start testing. The NOx mass rate measurements in the first 1,200 seconds after ignition show how the SwRI system effectively minimizes these emissions during this critical period of operation.

For this application, engineers used light-off SCR (LO-SCR) technology — a relatively simple, low-cost solution — as the first aftertreatment device in the exhaust stream. Placing the catalyst near the engine takes advantage of elevated exhaust temperatures to better reduce NOx during cold-start and low-temperature scenarios. Then, SwRI used a zoned-catalyzed soot filter (CSF) that incorporates DOC and DPF technology into one component as the next aftertreatment system in the exhaust stream. This configuration decreases emission particulates with less heat loss to the exhaust delivered to the final aftertreatment device, an SCR system. These advanced active emission control systems inject diesel exhaust fluid, which reacts with a special catalyst to create the ammonia (NH3) needed to effectively remove NOx from the exhaust stream of a diesel engine.

In addition to cold start scenarios, delivery trucks often operate in low-temperature modes as vehicle systems cool during the multiple stops along a route. This SwRI strategy could minimize NOx emissions in these common scenarios.

The SwRI configuration reduced NOx by up to 99% in the first 400 seconds after ignition, while today’s systems can only achieve 30% for the same period. The 1.3% fuel penalty is a small price to pay for the substantial improvement in NOx reduction. SwRI achieved this performance with a system-level approach to improve fuel economy and NOx emissions without compromising either one. 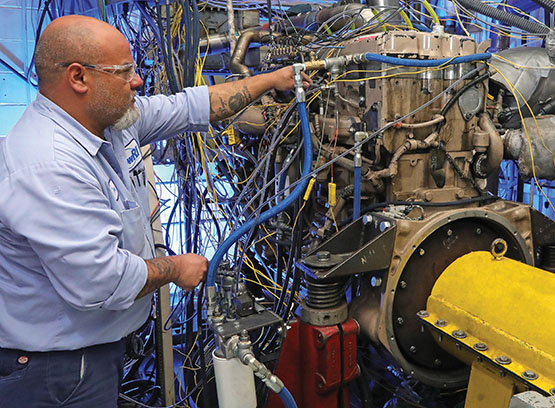 Using a systems approach, SwRI has developed a fuel-efficient heavy-duty engine that achieves 90% NOx emission reduction over real-world driving conditions, where catalyst temperatures are typically below the optimum level. 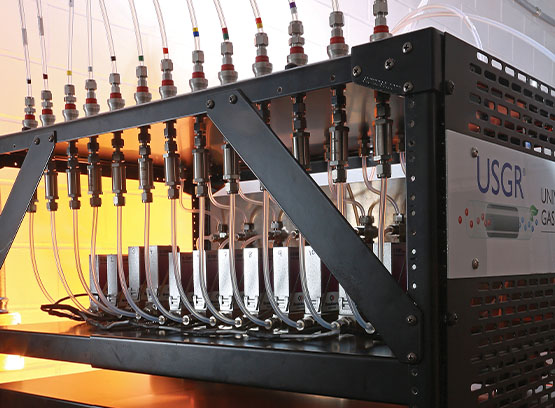 One of the key challenges to decreasing NOx emissions is maintaining reduction efficiencies in excess of 99.5% across the full range of engine operating loads and temperatures. Commercial SCR technologies can achieve high performance within a narrow band of conditions, but struggle to do so outside that range. To address this problem, SwRI engineers conducted internal research to develop and deploy a model-based controller for SCR systems. This high-fidelity controller models the catalyst state, predicting the amount of NH3 absorbed by the catalyst surface as it is constantly consumed and reintroduced into the catalyst via an injection system. During a duty cycle, dynamic SCR temperatures change the maximum NH3 storage. Ensuring that enough NH3 is adsorbed without NOx breakthrough or NH3 saturation requires prediction accuracy and high-speed feedback.

To achieve proposed ultra-low NOx emission levels at minimal fuel penalty, SwRI has validated a combination of diesel engine hardware and aftertreatment technologies that can meet or beat the target. SwRI is continuing to evaluate the system and its NOx reduction performance under realistic operating conditions such as hydrothermal stress and catalyst contamination to validate real-world performance of tomorrow’s ultra-low NOx heavy-duty emissions technology.

Emissions aftertreatment systems filter exhaust emissions and reduce pollutants escaping into the environment. The new cycle challenges aftertreatment systems by analyzing them in common, but unfavorable, low-load conditions, such as idling or speeds less than 25 miles per hour, when exhaust temperatures are low. Current regulatory certification cycles simulate urban and highway driving only.

“The Low-Load Cycle is uncovering weaknesses in current tests used to certify engine emissions technology,” said SwRI Research Engineer Bryan Zavala, who was part of the development team. “When we operate heavy-duty engines at low-load conditions, the aftertreatment systems do not perform well. This tells us heavy-duty diesel engines are routinely emitting emissions above the regulated standard.”

SwRI developed the Low-Load Cycle for the California Air Resources Board (CARB), a state organization charged with combatting air pollution, using real-world service logs to characterize the full range of operating conditions. California is projected to be the first state to implement the stricter engine test when new emissions standards are scheduled to take effect in 2024.

During LLC, a technician connects the engine to a dynamometer, adjusting the speed and torque to reflect a low load. Aftertreatment technology exposed to the stringent cycle consistently shows deficiencies.

“If the Low-Load Cycle is widely adopted as a standard test, we would expect manufacturers to develop technology that can pass these challenges, leading to less pollution and cleaner heavy-duty engines on the road,” said SwRI Senior Research Engineer Shekhar Vats. 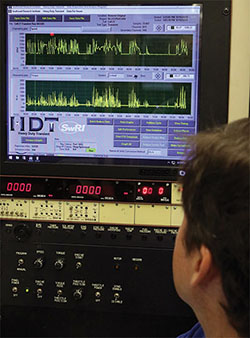